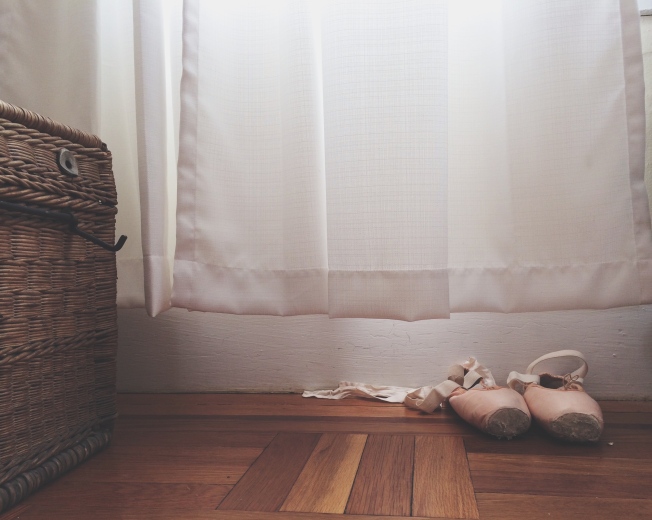 There’s less than one week left in the season, and my body is begging for a break.  Bruises splatter my knees and my eyes wander out the window towards the sunshine too many times throughout the rehearsal day.  Spring is calling.

We’ve made it through our second of three weekends of Up Close On Hope, and I’ve had the pleasure of dancing five very different pieces so far.  With drastically different styles from one ballet to the next, I’m feeling like a bit of a pointe-shoe-clad chameleon.  First there was Mein Weg, Joseph Morrissey‘s linear and at times anxiety-inducing show opener, which, with Morrissey currently residing in Hong Kong, we learned and set using 4 video recordings of the piece.  This may sound like an easy, every day ballet task, but the intricate arm motions, partnering, entrances and exits comprising this dynamic and challenging contemporary ballet transformed it into a truly ambitious exercise for the body and the mind!  I also had the pleasure of dancing in FBP principal Vilia Putrius‘ deeply moving All Birds Become Silent With the Moon’s Complaint, a highly narrative work depicting a troubled girl’s life from joyful childhood to arduous adolescence, culminating in the stirring final breakdown.  The part I danced last night, which I’ve loosely interpreted to represent a negative relationship from which one cannot seem to escape, required I be strapped to another dancer through an elastic between our waists.  We maneuvered in and out of lifts, turns (I even do a brief menege-like sequence involving cartwheels!), all the while tethered to one another.  Another new experience provided by the ever creatively fresh mind of Ms. Putrius.  I was also lucky enough to be tossed into resident choreographer, Viktor Plotnikov‘s, newest piece Urban Shadows, after only four rehearsals.  It’s really a beautiful piece of art, showcasing difficult weight-sharing partnering and fluid movements which have lead me to affectionately bestow the nickname “Aquatic” Shadows.  Performing in Plotnikov’s piece last night taught me a lesson in dancing before the muscle memory has had its chance to set in, and the particular importance of exhibiting a relaxed awareness on stage.

In one evening alone, Alex and I experienced an entire romantic relationship from start to finish…ballet style.  We met, “nuzzled”, and fell in love in Misha’s floaty and romantic pas de deux, For Susan.  Post intermission, an intimate male pas de deux (originally choreographed for a man and a woman by the incredibly cool Sydney Skybetter), projects my dear partner’s true feelings (hehe), foreshadowing our emotionally charged breakup, where he leaves me in Jorge Rullan’s powerful 3.23.  Of course, none of these pieces were actually related, and the “relationship” was entirely of our own creation, but that’s what’s so great about partnering with one of your best friends; You get to share strangely wonderful experiences together that no one else will ever quite understand.  We’ve performed so many widely variant things together now, and each time I seem to appreciate our bond as partners and friends more and more.

If you’re in the RI area, come check out our final weekend of Up Close On Hope and then celebrate the next day with the company at Fiestival!