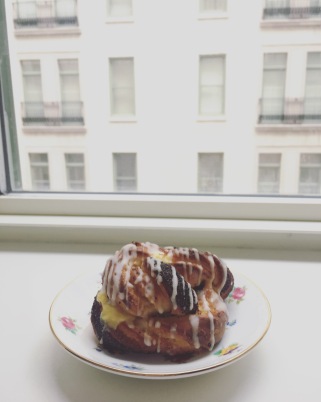 When I looked back through my photos from last weekend in New York, I felt a wave of gold and pink.  Gilded and floral. Luxurious and blooming.  These hues really do best describe our trip.   Of the many gilded fixtures and blushing bouquets, though, one of each proved truly special…

Friday was meant to be “my birthday”, for our celebratory purposes.  Unfortunately, I had been slightly handicapped by some strange spine-bending stomach pains that morning.  BUT!  Knowing me too well, my friends had arranged for us to spend the day in one of my favorite Brooklyn neighborhoods, and no belly ache could keep me from Catbird.  We hopped off the subway and I shot straight for the little jewelry boutique, tucked into 219 Bedford.  My goodness is that place magical.  Swept up in a sea of my own ooohs and ahhhs, it was like being pulled from a trance when T summoned me to the back wall looking excited.  My three best friends looked at me with bright eyes and wide smirks and pointed to a tiny bowed box on the shelf.

“Yeah! You should open it.”

After some “Huh, you want me to open this?” investigating, I started to catch on.  My trance reinstated.  I untied the teeny golden bow, and inside the bitty little black box I found an ever teenier little gold ring.  Feeling overwhelmed with surprise and excitement, I peeled the beautiful specimen out to read the engraving: a m i s ; meaning friends in French.

Are you wondering if I freaked out?  Oh my goodness did I ever!!!!!!  Choked up, I squeezed them into group hug after group hug, several times in the tiny boutique, once more outside on Bedford, again in the Tea House, and a few more times back at the Plaza.  I also developed this strange affectation of slow, exaggerated spirit-fingers-ing to subtly show my appreciation for their love, now forever suspended in gold and wrapped up in my hand.

I have seen the New York City Ballet live twice before.  The first time at Saratoga when I was a wee one, I think it was an excerpt from Harlequinade?  Hard to say.  The next time was several years ago on a December trip to the city with my dear Mama.  We saw The Nutcracker and, perhaps too infatuated with our own version, agreed that Ashley Bouder’s Dew Drop (and Waltz of the Flowers in general), was the stand alone wow.  Last Saturday night, though, I had the honor of witnessing Lauren Lovette in the second show of her Aurora debut, along with quite a few corps de ballet dancers who would be promoted to soloist the very next day (congrats, Indiana!).  Now I can say, with full reverence of the word, wow.  Wow, wow, wow.  What a show.

Lovette was the most perfect Princess Aurora.  Sweetness seeming to drip out of her in place of sweat, she eased her way through the ballet as if the character were hers from birth.  Every glance felt genuine, every touch appeared to affect her deeply, giving the impression that Aurora’s experiences were crossing over her own in the moment.  The sad, sweet, scary elation of such a momentous debut.  Her lines were sculpted yet understated, never sacrificing rotation and shape for alien extension.  Lauren is certainly one of NYCB’s more lyrical principals, but not for a lack of clarity in the crispier choreography.

The rest of the ballet was spectacular as well- those transforming scrim scenes leading you into the castle!- but Lauren really charmed us the most.  I mean, T wept through the entire Rose Adagio, so.  Yeah.  Safe to say seeing Miss Lovette blossom into this beautiful Briar Rose was a most worthy birthday gift.

*I managed to take home 3 TINY TINY TINY bottles of Tabasco from The Palm Court.  Yep.