There is a significant someone missing from my previous YAGP posts, and that’s because I thought he deserved one of his own. The Youth America Grand Prix’s 2017 Lifetime Achievement Award was given to charming Mr. Bruce Marks, and boy, is he deserving. Though Marks’ roster of lifetime achievements is exceedingly impressive- an alumni of Brandeis and Julliard, protege of Anthony Tudor, principal dancer with The Metropolitan Opera, American Ballet Theatre and The Royal Danish Ballet, Artistic Director of Ballet West and Boston Ballet, to name a few- his proudest achievement seems to be the one he’s still working on: inspiring the next generation. 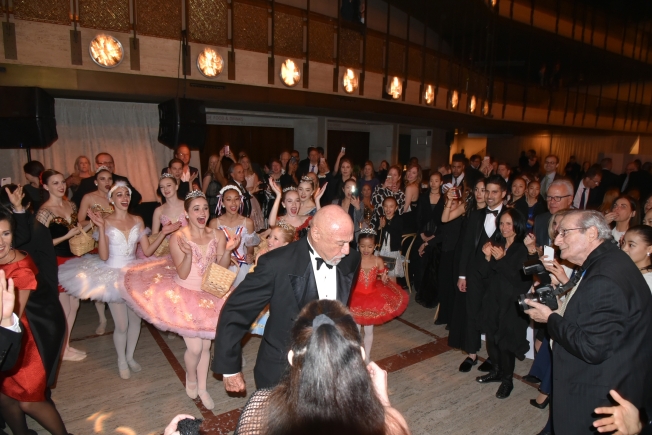 Bruce Marks accepted his recognition during The Stars of Today Meet The Stars of Tomorrow gala, fittingly just after the massive collection of baby bunheads known as Grand Défilé finished performing. Adorable little Guin Anne and the lovely State Ballet of Georgia Artistic Director Nina Ananiashvili presented the award. Marks’ speech was smart, sincere- albeit a bit on the lengthy side- but gracious and passionate nonetheless. All adjectives that seem suitable to describing the illustrious man himself. But my interaction with Mr. Marks took those things one step further…

Just after the gala dinner of a lifetime, as B and I were returning to the Empire to hit the rooftop for a nightcap, it became very apparent to us that every fancy person we’d rubbed elbows with that night was doing the same. Passing by familiar faces in the crosswalk and making our way to the entrance, we  practically bumped straight into Bruce Marks under the awning, chatting with a few adoring friends of his. We paused, his famous friends departed, and with his gaze right on us, we approached. I extended a hand to introduce myself, but instead Mr. Marks warmly interrupted, “Come here, give me a kiss.” I felt like I was back in the shoes of my 14-year-old self, awestruck over one of the true greats. Pulling us in for quick hugs, we managed our hellos and expressed thanks for his immense dedication to the furthering of ballet education. Of course, it was difficult not to let slip at least one remark about his incredible legacy as a dancer. To that he replied- humble as anything- some more eloquent version of being in the right place at the right time. Marks credited his success to the dancers who taught him, noting that his duty is to spread what they gave him, “from Bejing to Brazilia”. What Mr. Marks said next really stuck with me:

I’m a conduit, not a camera. It appears Marks would suggest that he is a transmitter, not a machine made to capture. His job, according to him, is to transfer information. It is not to contain and show, but to give away. It felt like a metaphor for something even more, like the truest expression of ballet itself. It is not a tangible, framable art form. Not something to be held or collected, but a series of hard-earned, emotional moments, given away to the audience in the form of some lingering impression.