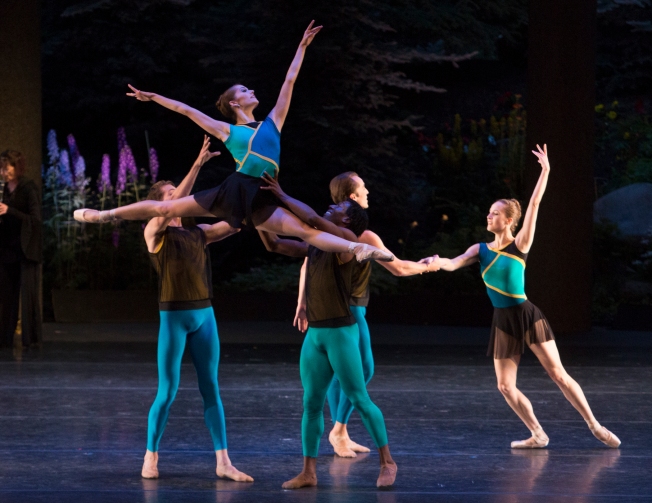 Though Damian Woetzel has presented female choreographers steadily throughout his ten years with the Vail Dance Festival (VDF), he decided it was high time he, in his words, “put a button on it.” Last night marked the first ever complete evening featuring premiering choreography exclusively by women.

The evening quite literally opened with a cubed puzzle of dancers unfolding like a kaleidoscope to begin Claudia Schreier‘s Tranquil Night, Bright and Infinite. Schreier’s relationship with the festival goes way back; After studying George Balanchine under Heather Watts at Harvard University, she became one of the inaugural members of the festival’s internship program in 2007. Ten years later, Schreier celebrates the centennial of the great Leonard Bernstein a year early, creating joyful, musically connected movement to his Sonata for Clarinet and Piano. This piece is pleasing to the symmetry obsessed, the long lines of Unity Phelan and Liz Walker creating mesmerizing Rorschach stains. The two seep from the center outward, supported by Cameron Dieck and Jared Angle. Dance Theatre of Harlem’s Da’von Doane shines, his bliss ever obvious from the amphitheater’s last row. 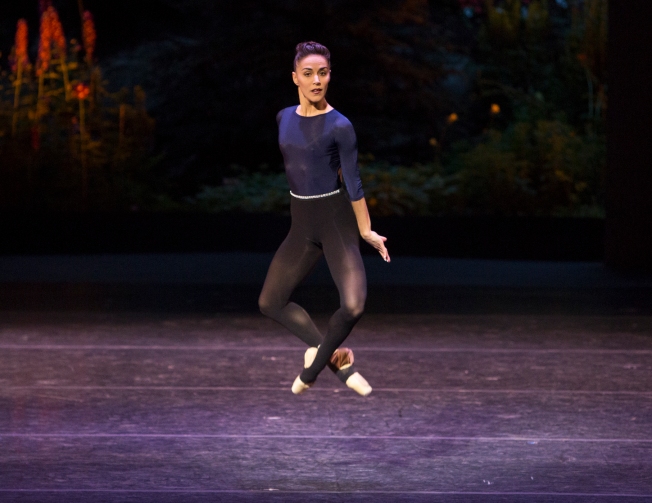 The next offering is perhaps the purest definition of inspiration: as choreographer Pam Tanowitz and dancer Patricia Delgado shared a ride from the airport to the festival last week, Tanowitz was moved to create a solo for Delgado. The resulting Solo for Patricia is an upbeat, staccato conversation with music.

I attended the Newport Folk Festival in Rhode Island just before heading to Vail, and a few of my friends asked what my favorite new music discoveries were. If I were to name one dancer as my favorite new discovery here at the Vail Dance Festival, it would be Delgado. Of course, having a best friend who trained at Miami City Ballet (Delgado’s former company) I was aware of her talent, but seeing Delgado blossom in this intimate space has made me most excited to follow her evolving career. 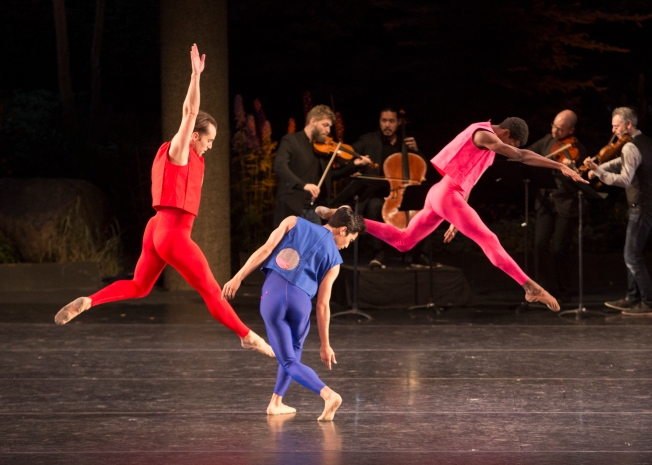 The Tanowitz choreography continues, with her offbeat Entr’acte. Named for a German term meaning “between the acts”, this piece shouts from the stage with brightly colored costumes by famed costume designers Reid & Harriet and unapologetic classically modern choreography. The steps are both irregular and casual, expressing a Jerome Robbins’ sort of vibe with dancers dancing for each other, not the audience. The music is a piece by Caroline Shaw, the festival’s first Leonard Bernstein Composer-in-Residence, played live on stage by Brooklyn Rider. Shaw takes the stage pre-show to describe this piece of music as a classic minuet taken along with Alice through her distorting Looking Glass, and Tanowitz’s choreography seems to mirror that. The relaxed quality of Melissa Toogood‘s movement transcends in Entr’acte; she and Tanowitz are a perfect match. 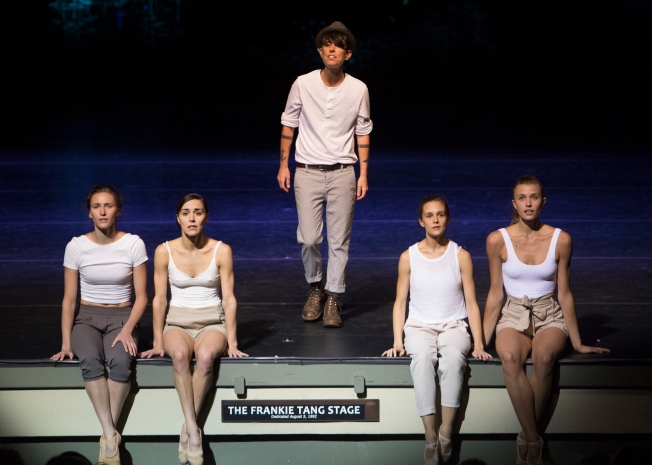 Closing Act I is Lauren Lovette‘s Angels of the Get-Through. The collaborative work features another Caroline Shaw piece, described by the composer as a 16th century hymnal swirling around the top of a cathedral and falling in fragments back down. Something about this introduction really excites me. It seems so perfectly coordinated with the echoed nature of Andrea Gibson‘s poetry, which is performed live by the poet herself, as she weaves in and out of Lovette’s detailed scenes. The first lines:

are placed in a room

if a chord on one violin is truck

will sound that same note.

…describe this idea of our reflection on those around us. Perhaps it was my hour-long conversation with the choreographer right before the show (details coming soon!), but I could not help but feel connected to this ballet. I confess I am not usually one for spoken word poetry as accompaniment (I prefer “getting lost” in a classical arrangement) but Gibson’s words- and Lovette’s interpretation of them- are affecting. It’s no surprise at this point that I am enraptured by the first movement featuring an emotional Patricia Delgado, and equally captivated by the following section, where Delgado is joined by Lovette. In a segment of Gibson’s poem designed as a series of commands, calling her love to ultimately “come become beside me,” Lovette and Delgado are immersed in each other. They do not acknowledge us, but somehow we cannot look away.

Lovette departs from her first commissioned work for the New York City Ballet by exploring an entirely contemporary vocabulary. The next section muses on the frailty of human connection and our overriding aversion of interaction with strangers. Miriam Miller and Devon Teuscher are beautifully paired in this exploration of contact. All four ladies come together for a final movement. The girls lift up a wistful Teuscher together, Gibson’s words and their expressions begging her to express herself, to “be the Milky Way”. The entire cast strides forward one at a time to sit side by side on the edge of the stage. For this setting, in this show- in which it seems Lovette has taken to celebrating female relationships- this maneuver is wholly effective. 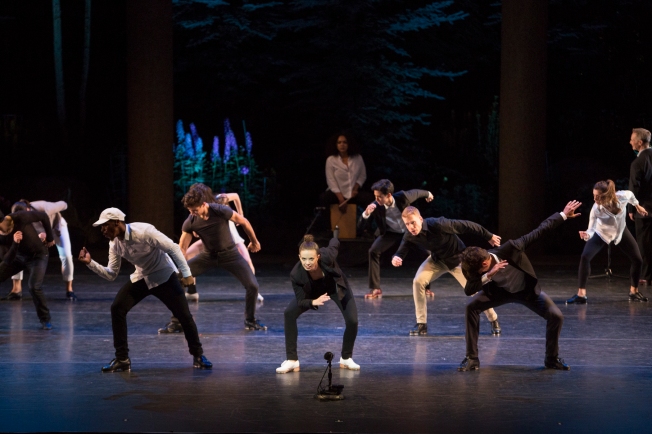 Vai Dance Festival Artists in Michelle Dorrance’s we seem to be more than one, photo by Erin Baiano.

The evening closes with a 30-minute manifestation of the 2017 Vail Dance Festival. VDF Artist-in-Residence, Michelle Dorrance, is the choreographer/genius if not slightly loony conductor of her we seem to be more than one, the colossal tap-based work featuring a star-studded cast of festival artists. Dorrance reminds me of Jiminy Cricket, whispering into the ears of her dancers. They are her unstring-ed puppets, hypnotized by the percussive movements Dorrance seems to involuntarily produce. This sort of radical presentation is exactly what I hoped to see in Vail: James Whiteside revisiting his roots, Tiler Peck on stage in tap shoes for the first time ever, jookin and flamenco swirled into Dorrance’s style. Damian Woetzel charming Ms. Dorrance, Bill Irwin stealing the show. ABT heartthrob Herman Cornejo just tapping away! It is this sort of nakedness, challenging established dancers with a foreign genre, an exposed style, and an entirely original cast, that makes this piece exclusively “Vail”.