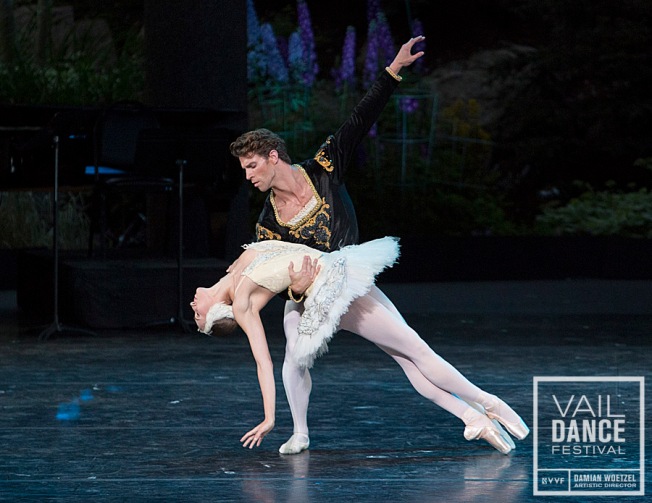 Last week I caught up with American Ballet Theater (ABT) principal, James Whiteside, between rehearsals at the Vail Dance Festival. James filled me in on his longtime love of ABT, his tap background, and his upcoming travels to Tokyo.

Kirsten: How long have you been at American Ballet Theater now?

James: This will be my fifth season with ABT.

K: How did you come to your decision to leave Boston Ballet?

J: Well I had always had my eye on ABT, ever since I was a teenager. It was the first big ballet company I saw and I was immediately obsessed.

After being in Boston for 10 years, I wanted to be inspired by new dancers, new work, new challenges, and New York City itself. So I auditioned on a day off during Nutcracker season in Boston, which is insane. Sometimes we do over 40 performances of Nutcracker, so I took the red-eye Fung Wah bus, back when that was still a thing, and I took ballet class with ABT. They offered me a soloist contract.

J: It was foreign and familiar all at once. The ballet world is very small, so I knew a lot of the dancers from- this, that, and the other- from guest performances, from summer programs, and stuff. But the rep at ABT is completely different from the rep at Boston. We did a lot of Balanchine, a lot of neoclassical work, a lot of contemporary work [at Boston Ballet]. ABT does big classics. Swan Lake, Sleeping Beauty, Giselle, etc. So I had to learn all of ABT’s rep in an extremely short time, and I did an obscene amount of debuts that first year. Then I was promoted to Principal in the Fall.

K: Do you feel like you’ve adjusted to New York life?

J: I’m from Fairfield, Connecticut, so I spent a lot of time in the city as a kid, going to Broadway Dance Center, seeing Broadway shows with my dance teachers. I’ve had my heart close to New York City for a long time. So it feels more like a homecoming.

K: So now your address just matches your…

K: [Laughs] Now, this isn’t your first time in Vail.

J: This is my third year in Vail. My first year I only did one ballet. Last year I did a lot, this year I’m doing a lot, and I’m coming back next year.

K: So it just progresses more and more as you keep coming back?

J: Yeah, they make you work! Damn! It’s really, really ambitious. Incredibly ambitious. In a way, it feels like our New York season: putting together a large amount of things in a short amount of time. It’s crazy, this festival has gained so much visibility in the dance world. It’s become the dance festival.

K: What keeps you coming back to the Vail Dance Festival?

J: My favorite thing about this festival is the location, the setting, the nature.

K: It really is beautiful. Has the altitude been an adjustment?

J: Oh, of course. Everything is harder here, without a doubt.

K: So what are you performing in Vail this year?

J: I have danced the White Swan Pas de Deux with fellow ABT Principal Devon Teuscher. I have also danced Michelle Dorrance’s 1-2-3-4-5-6, where I had to do a lot of tapping, so that was fun. I tapped as a teenager, so it was nice to revisit it. I did a new ballet [Farewell] by Matthew Neenan on Saturday night. I danced with an old colleague of mine, Misa Kuranaga. We danced together a lot in Boston. It was so nice to dance with her again, she’s an extraordinary dancer.

I’ll be dancing in the new Michelle Dorrance ballet- I keep calling it a ballet, but it’s a dance. [Laughs] I don’t know what it’s called, but it is epic, and ambitious and daring and I just can’t believe we’re doing it tonight. I’m a little stressed out.

K: [Laughs] That’s kind what the festival is about though, right?

J: Amen to that! It all will come together, I know it will.

K: Definitely will. So that’s a big piece…

K: [Laughs] All of the in between…

K: So what’s up next after Vail?

J: My summer has been completely booked with festivals and galas. It’s been exceptionally fun. It’s been like a tour- I feel like I’m on a rock concert tour. I’ve been a lot of places, I’m going a lot of places.

The next stops on my “summer gig tour” are Sun Valley, Idaho, which has a similar beauty to this, actually. And Tokyo.

K: Have you been before?

J: I’ve been to Toyko before, yeah. It’s just so strange and wonderful. Just so different.

K: Dream destination for me.

J: And then I have my Fall season with American Ballet Theater. I have some personal projects in the works, which if you follow me on my various socials, you’ll learn of.

K: So back up for a second, though, what are you going to be doing in Tokyo?

J: In Tokyo, I am choreographing and dancing in a Disney ballet DVD release of Beauty and the Beast.

K: That’s really exciting. And what are you doing in Sun Valley?

J: In Sun Valley I’m dancing [George] Balanchine’s Rubies Pas de Deux with Tiler Peck. I’m also doing a solo I created to Louis Armstrong’s You Rascal You, which I made a short film for years ago that people really liked. The premise is that I have killed my wife’s lover. I’m really excited about it, I’m dancing around in the streets. You can view it on Youtube.*

K: Great! Are you looking forward to getting back to New York after that?

J: Yes. But I actually haven’t had a day off since June, so next week from Wednesday to Wednesday, I’ll be in Provincetown, Massachusetts.

Thank you for chatting with me, James! Enjoy some well deserved rest in P-town.

*Editor’s note: I watched James’ You Rascal You video immediately after transcribing this interview and- oh my goodness- go watch it right now. Please.

double posting this show! what a special ballet. this one swings- the music, the movement, the mood. so honored to have been a part of it! choreography and photos of “Blue Until June” by @treymcintyreprojects