Summer and New England have only just made things *official*, and already this is the most traveling I have ever done on a summer layoff- hands down.

From New Zealand, to the Berkshires, to Maine and soon enough Colorado (more details on that soon), M and I have been zipping around this globe like hummingbirds dipping our little beaks in here and there and everywhere. In the process we’ve learned a thing or two about what makes travel more enjoyable for us. My biggest lesson learned, if you’re interested…

END_OF_DOCUMENT_TOKEN_TO_BE_REPLACED

I am so excited to announce Setting The Barre‘s first ever giveaway!

I’ve teamed up with the lovely creators of some of my favorite dance/activewear apparel brands to create a fun, fresh outfit (valued over $200!) that can take you to the barre and beyond…

END_OF_DOCUMENT_TOKEN_TO_BE_REPLACED

January is a rough month.  It’s long.  It’s cold.  It’s still fairly dark when your alarm goes off in the morning, and it seems like April is mocking you with its Eastery glow…3 hard months away.

To combat the winter blues, also known as SAD (seriously), a few friends and I have decided to brighten these grey days by initiating a “treats rotation”.  For those of you unaccustomed with this particular institution (I think we made it up?), each day one of us is responsible for bringing in a yummy treat for the rest of the group.  The first week I made everyone a little batch of almond butter and packaged them in mini mason jars with rustic twine bows.  It was pretty adorable.  This week I tried out a new recipe and made these things called “energy balls”, which are apparently extremely delicious, as well as deceivingly simple to make!  Here’s how I did it…

First combine 2 cups of nuts (I used 1 cup almonds, 1 cup pecans) in a food processor until coarse.  Then add in one cup of dates (I used medjool), and 1/2 teaspoon of cinnamon and process again for about 2-3 minutes.  Then shape into balls and roll in shredded coconut for a shmancy touch.

Outside the regular treats rotation, I’ve been attempting to cure my cold weather slump by making myself some special snacks, including a homemade granola using Alex’s family recipe, and a delicious muesli, the recipe for which I created as I went along.  Dedicating my Monday nights to the kitchen and surprising my friends with yummy bites has really helped lift my spirits as of late.

I’d love to know, how do you boot the winter blues?  Would you ever consider a “treats rotation” with your friends?

I used to claim I’d never enjoy running.  Being a dancer, my joints are very dear to me, and the negative effect running can have on them was just never worth the risk.  This summer, however, that changed.

I decided to try interval running, a technique where you run for a few minutes, then walk for a few minutes, and alternate the two speeds throughout your entire distance.  I am SO glad to have finally realized the beauty that is interval running.  It allows me to rest my joints and feet for a bit between spurts, while still keeping my heart rate elevated for the duration of the workout.  That is what you call the best of both worlds, folks!

Now, I can proudly say I am a changed woman.  While I can’t yet claim to ever actually look forward to running (constant heavy breathing, hair stuck to my forehead with sweat, aching feet, and I don’t even get to wear a tutu? hard to see the bright side here…), I have finally found a way to make running accessible to me.  I even went out running in the pouring rain the other day, just to get in a good sweat and clear my mind!  This may not seem like an accomplishment to most, but I am pretty darn proud.

{spotted: raindrops on roses during my rainy run}

Today my roommate/partner in crime/workout buddy traveled to the Cape (lucky duck!) to sit some babies, and I surprised myself by continuing the workout regime all by my little old self.  This may seem like a small act of simple self-control…but let me just say, people, I am SORE.  Not your average sore, either, but 3rd-day-into-new-fitness-routine-after-several-months-of-increased-couchtime, fiery pain in my back, arms required to stand up from any position because my legs are like jelly, S-O-R-E.  But like they say, it’s good to feel the burn…no pain no gain…sweat is fat crying…you know the schpeal.

Anyone else trying to get in better shape?  I raise my homemade, delicious and nutritious, post-workout protein smoothie to you, cheers!  Oh and here are some pictures that might help you along (I know they’re kicking me in the buns!)… 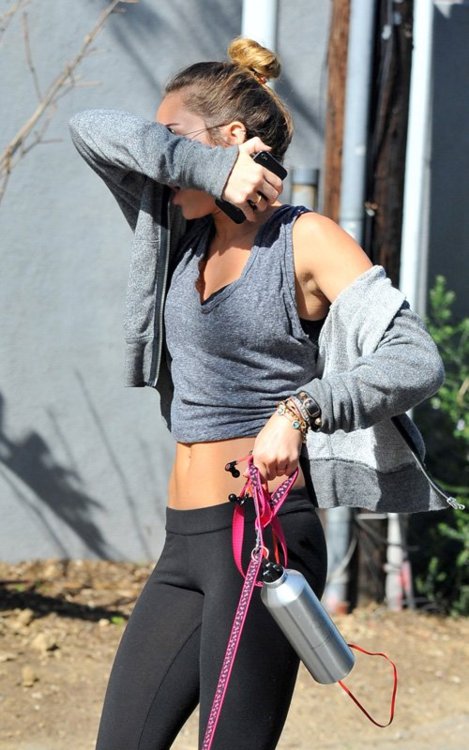 P.S. Dang, Miley has a nice body, huh?!  I hate this phrase but- prime thinspiration!

Have a great, healthy Thursday, chickens! 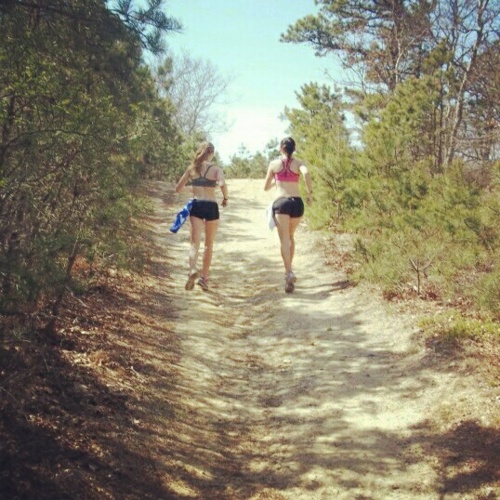 Everyone knows a work out buddy makes sticking to a new fitness routine easier (not to mention more fun!).  Yesterday, the roommie and I embarked on a 10-day workout/cleanse, and booooy am I feeling the effects today.  Let’s just say 20 minutes of “Insanity” followed by a 7-minute P90X ab workout after being practically immobile for 3 weeks HURTS.  But you know what they say- the first 3 days of any new fitness/dieting regime are the toughest!  So I’m currently scouring Pinterest and Tumblr for more workouts and I’m determined to stick to it.  This is going to require a lot of motivation..thank goodness for workout buddies!