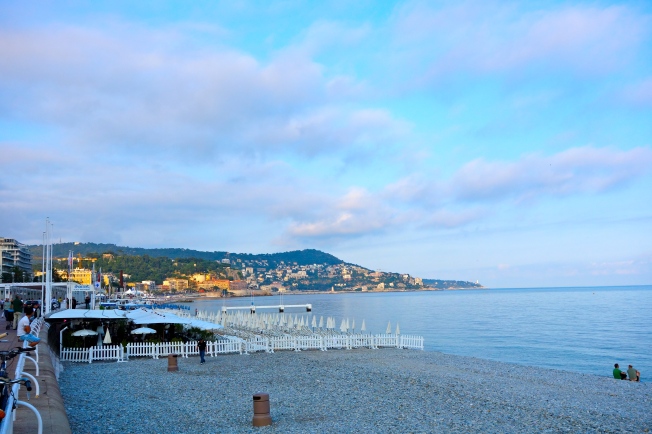 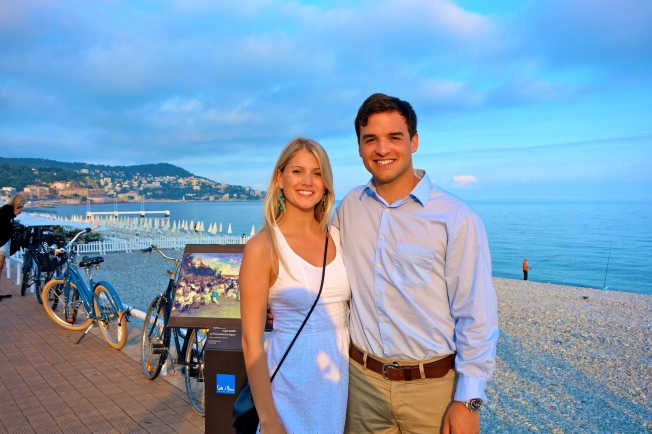 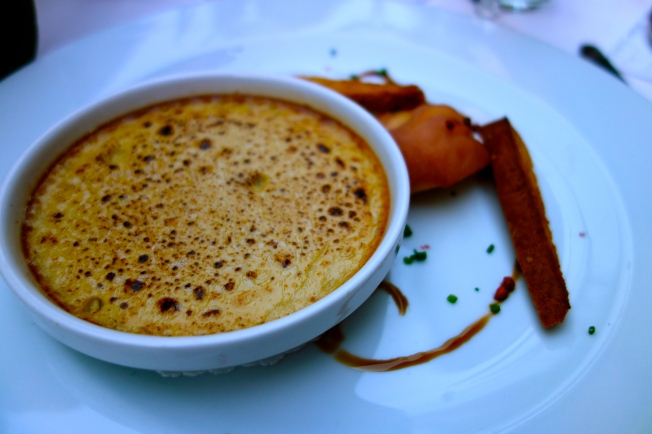 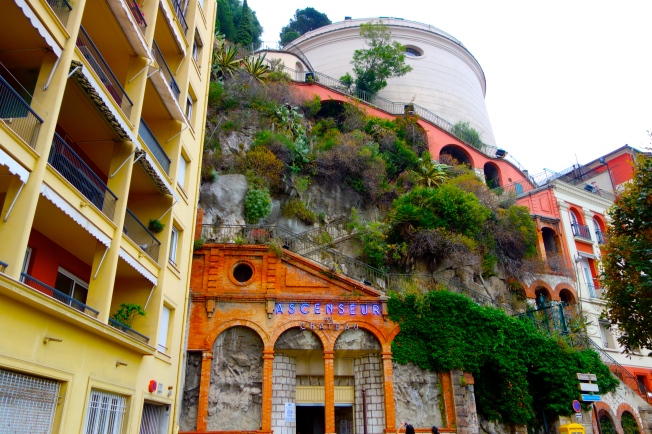 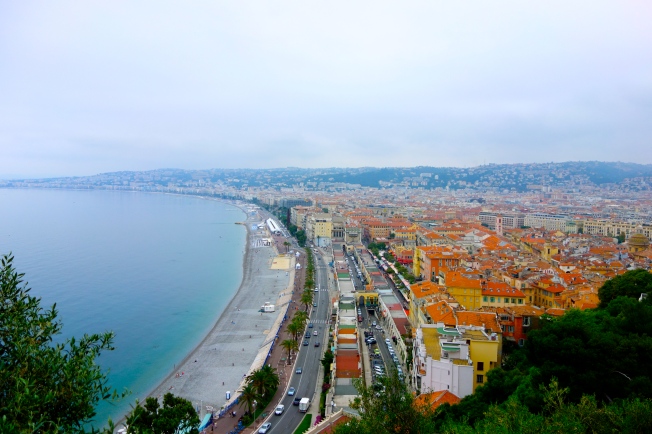 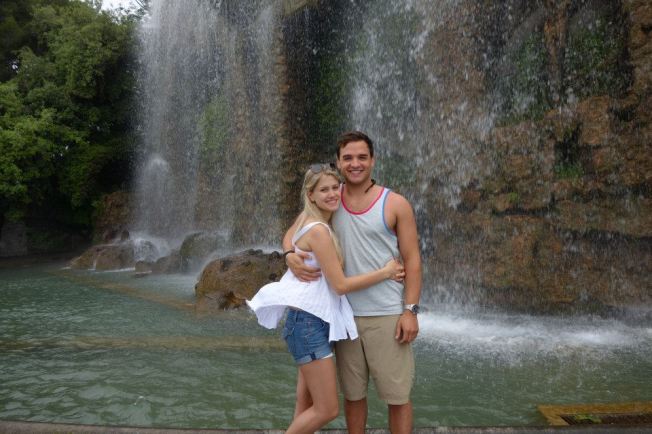 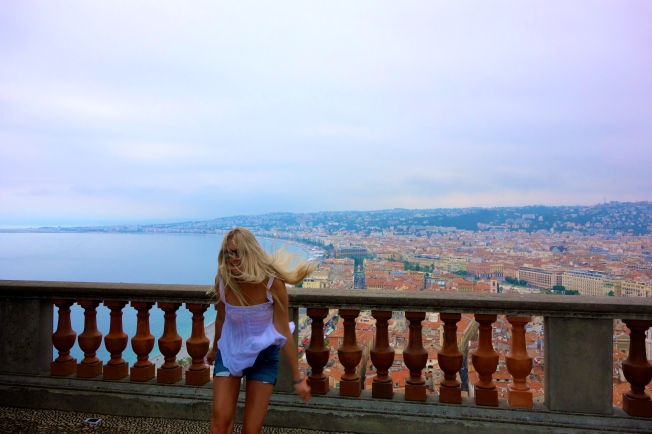 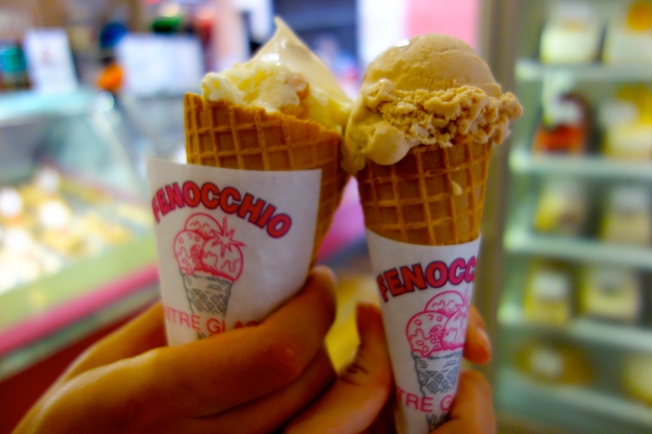 One of my favorite things about visiting Nice was trying all of the delicious cuisine there.  On our last night, Kevin and I indulged our culinary senses at Le Grand Balcon.  This decadent restaurant takes up residence in a quite enviable location: directly next door to the Nice Opera House.  This prime positioning is responsible for the theme of the menu, which is split up into Acts I, II, and III…a clever theater-related alternative to entrées, main plats, et desserts.  That night at dinner I had both the best apéritif (something with champagne and ginger in it- wish I could remember the exact ingredients!) and the best risotto (a black truffle/asparagus flavor) of my entire life.  I also tried Kevin’s foie gras creme brulée appetizer and was so pleasantly surprised.  That duck liver was scrumptious!  There is nothing else that needs to be said about the meal, other than too delicious for further description without drooling all over my keyboard.

The next morning, for our final day in Nice, Kevin and I set our alarms early to hit La Colline du Chateau (which we had admired throughout our entire dinner at Le Grand Balcon since the restaurant’s terrace provides a spectacular view of the mountain’s majestic waterfall).  The old fortified site was formerly inhabited by Celtic Ligurians, then conquered by the Romans and converted into a medieval town, only to be dismantled by Louis XIV during the Spanish Succession when the area was occupied by the French.  The stone-walkway-covered mountainside offers a complete view of Old Nice’s beautiful sunset-colored town and the crystal blue Mediterranean.  Kevin and I found a huge tree tattooed from roots to branches with scratchy looking initials and hearts.  Naturally, we had to add ours to the bunch!

After a long walk around the mountain, it was time to head down to the old village for some ice cream at Fenocchio’s, a famous ice cream shop known for its wide range of unique flavors that Kevin had researched before our trip.  I got a scoop of speculoos flavored glace, and for Kevin, a scoop of Grand Marnier and a scoop of Rum Raisin.  YUM.  Nice was good to my taste buds…less friendly to my figure…

All these festivities left us with just enough time to pack up and hang out on the promenade for a little bit.  Kevin did a watercolor of our hotel and I supervised. ;)  It was a fantastic end to a weekend I will never forget. 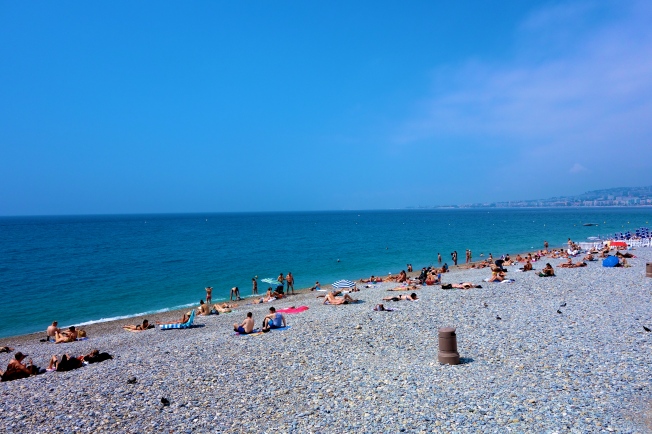 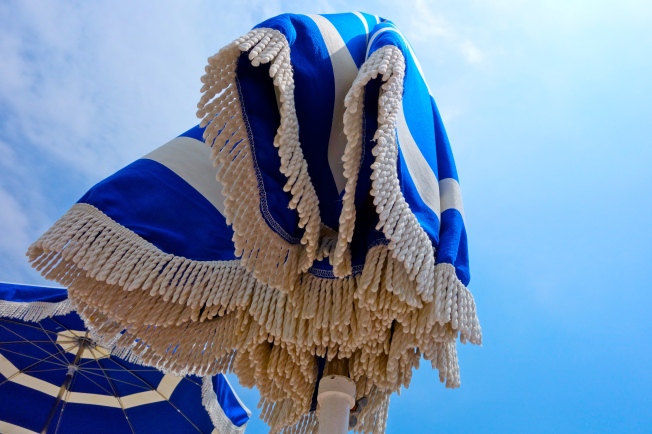 After falling in love with Nice’s incredibly welcoming farmer’s markets, Kevin and I headed to the beach for some much-needed sun time.  I’ve always been a sucker for tanning in a chaise lounge, snacking on dried figs and pomme frites while sipping a festive drink, but swimming in the crystal blue water of the Mediterranean Sea was really the highlight visit.  The infamous rocky sea floor can be difficult to aclimate to at first, but the tepid turquoise waves never grow too fierce, making the awkward rocky shoreline slightly less uncomfortable on the toes.  After practicing our breaststroke, floating on our backs and having a water-treading competition (first with no arms, then no legs), we retreated to the shore to harvest a small selection of the ample sea glass that splatters the grey stone canvas with bright hints of green and blue.  I have never seen so much sea glass in one place!  If that smooth aqua-colored shard you had your eye on gets swept up by one of those gentle Mediterranean waves, no worries; five more will be there to replace it by the time the next wave set rolls in.  While drying off/tanning in the sun afterwards, I noticed just how salt-soaked I was.  It’s true what they say about the Mediterranean having more salt than a Chinese take-out dinner for 6.  Okay, I just made that up, but it’s true!  My skin was completely devoid of any oil, and the bottoms of my feet were stained with a layer of thick white sediment.  What a rewarding sight after a lovely day at the beach in Nice… 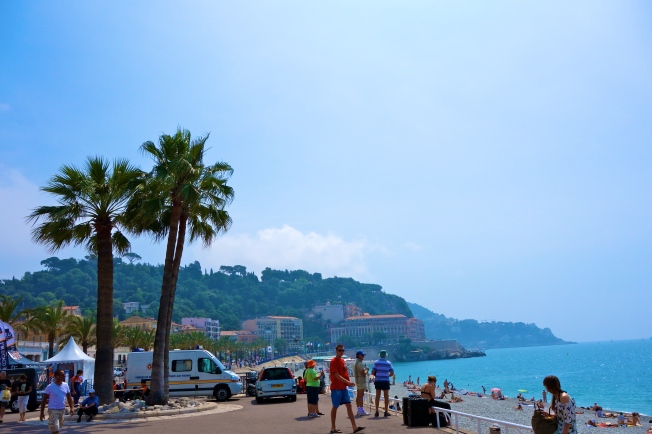 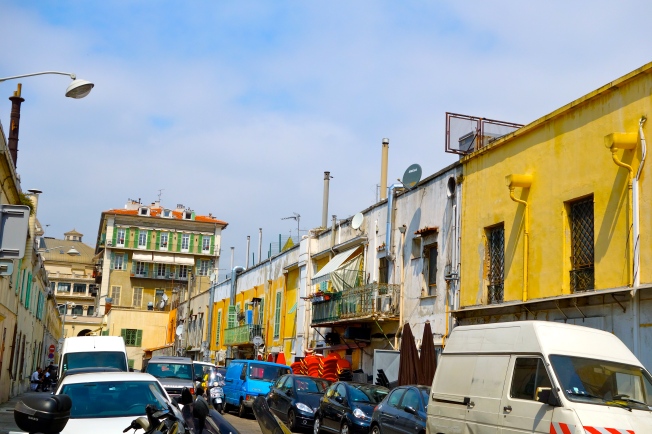 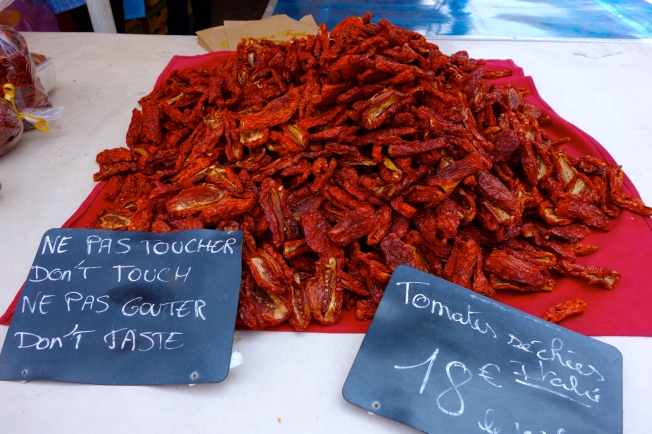 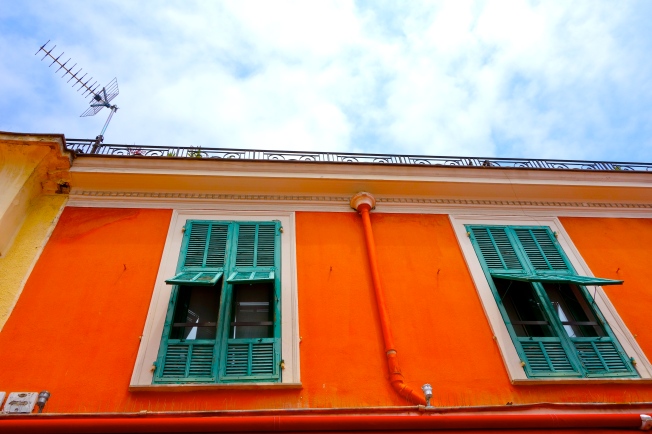 Our second day in Nice began with a visit to the all-organic Farmer’s Market on Le Promenade Des Anglais.  For any of you who have eaten an entire meal’s worth of samples at your local Whole Foods Market (and especially those who pride themselves on it like I do), I highly recommend you take any possible opportunity to visit Nice…if not for its gorgeous views and the salty blue Mediterranean, then simply for the delight that is this sample-happy open air market.  Every vendor we passed offered a bite of bread, a taste of green, black, mixed olive, basil, tomato, garlic tapenades- pick your poison.  Want to try a fig that tastes like a bon-bon?  Please do.  Care for an impossibly sweet prune? Here you go.  Meats and cheeses aplenty, fresh produce spilling out over table tops.  Fruit juices squeezed while you wait, refreshing carbonated citrus drinks offered up with a pastel-colored straw.  Row after row after row of peony and rose petals.  This place has. it. all.  And it’s just begging you to reach out and take a bite.  Please indulge yourself, you can practically hear the market’s unspoken urging as you float from one seller to the next, figs, lemonade, and 100% hemp bag in hand.

After falling under the unavoidable and hypnotic farmer’s market spell, Kevin and I journeyed further down the promenade and through an archway that read Quai Des Etats Unis, quickly realizing we had entered Le Vieille Ville, the old city.  Characterized by its warm colored stucco buildings stamped with bright green or blue shutters, this section of town immediately won my most prestigious of honors: the title of most charming place in Nice.  There, the farmer’s market theme continued, this time enclosed in vibrant striped canopies that seemed to stretch on and on forever.  Bellies half-full on samples, Kevin and I decided to top them off with a stop at a little Brasserie for some brunch.  Is there a word for that in french?…if not, simply see caprese salad below… 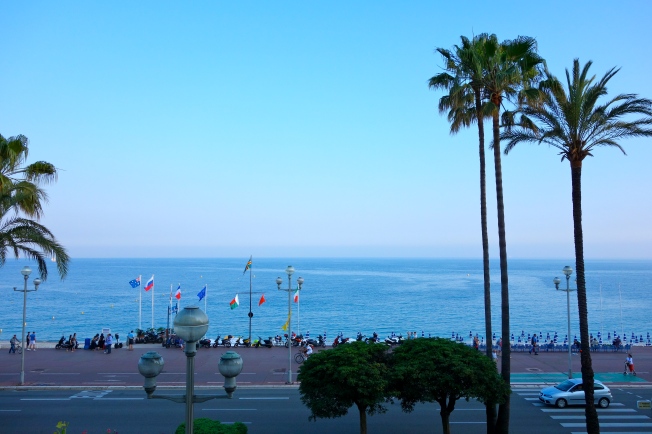 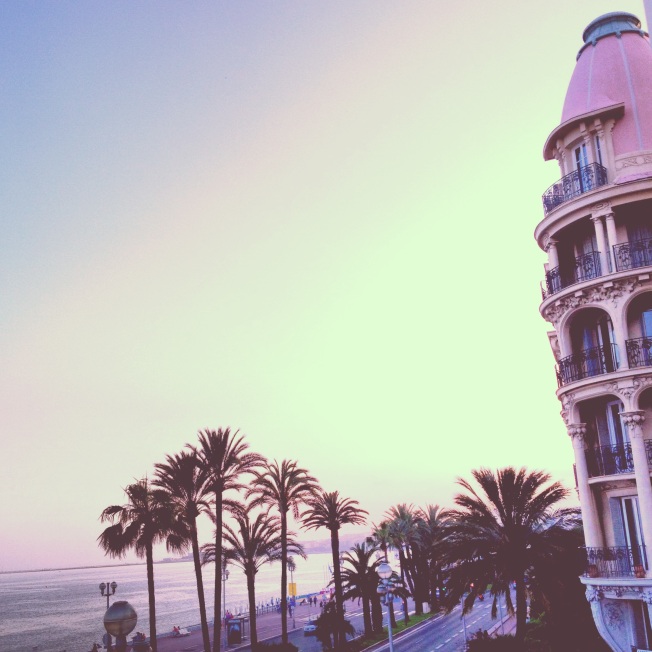 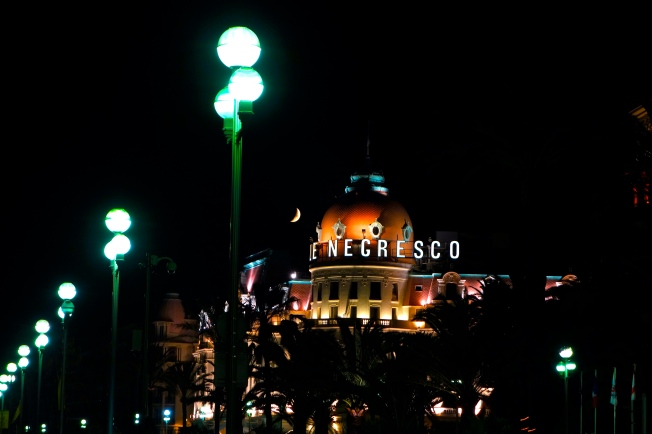 This past weekend I traveled to Nice with my boyfriend, Kevin.  It’s always been a dream of mine to visit the South of France, and having Kevin along for the trip was the cherry on top of the (extremely decadent) ice cream sundae.  Our first evening in Nice greeted us with an overwhelming level of perfection.  It was about 72 degrees, simultaneously humid and breezy- my ideal weather situation.  We showered, dressed in our South-of-France-bests and strolled down les promenade des anglais (the big boardwalk along the beach) to find dinner.  We settled on a neighboring hotel’s prefix 3-course dinner special (although our hotel, Le Negresco, was absolutely the focal point of the strip- and for good reason- its restaurant charges an arm and a leg just for an appetizer…not exactly our speed).  Dinner was delicious and just what I needed in my “hangry” state (dancers- you know what I mean!).  After a few glasses of wine, we headed down to the beach to check out the water and the rocky shoreline.  Could Nice have been any more welcoming?  Je pense que non.

And look at this sculpture that is part of Le Negresco’s extremely impressive art collection: