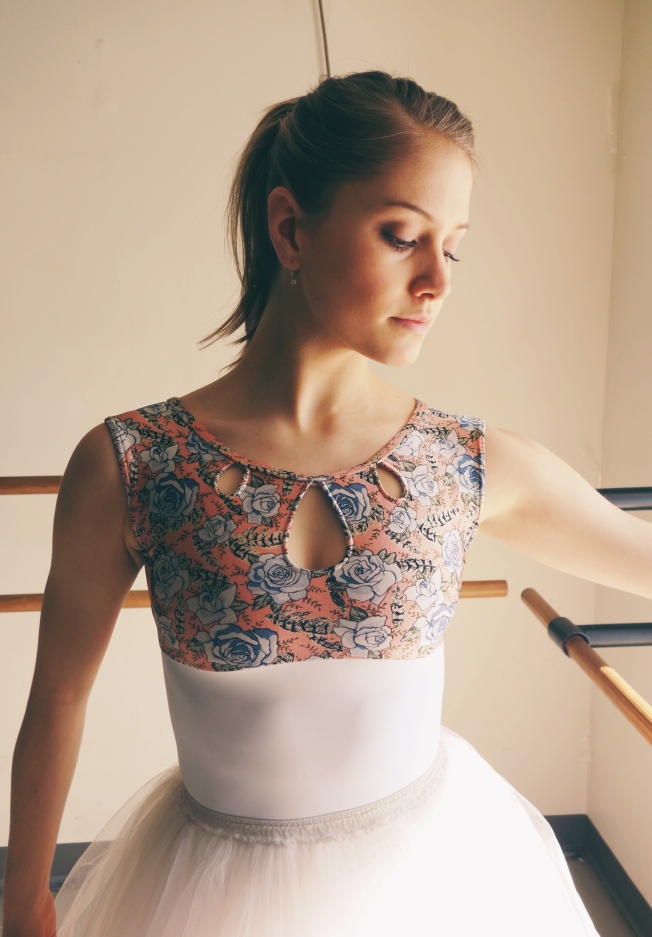 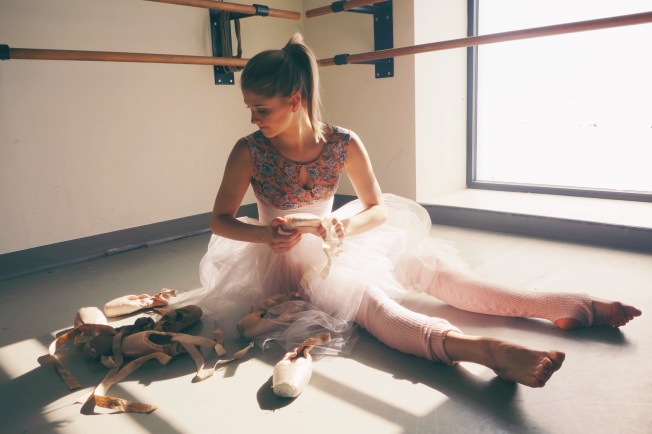 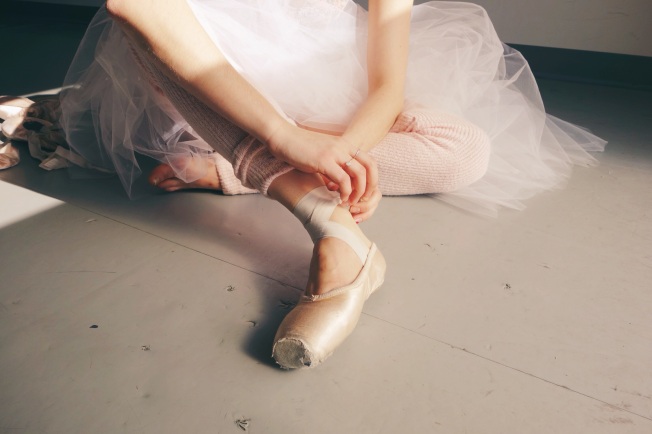 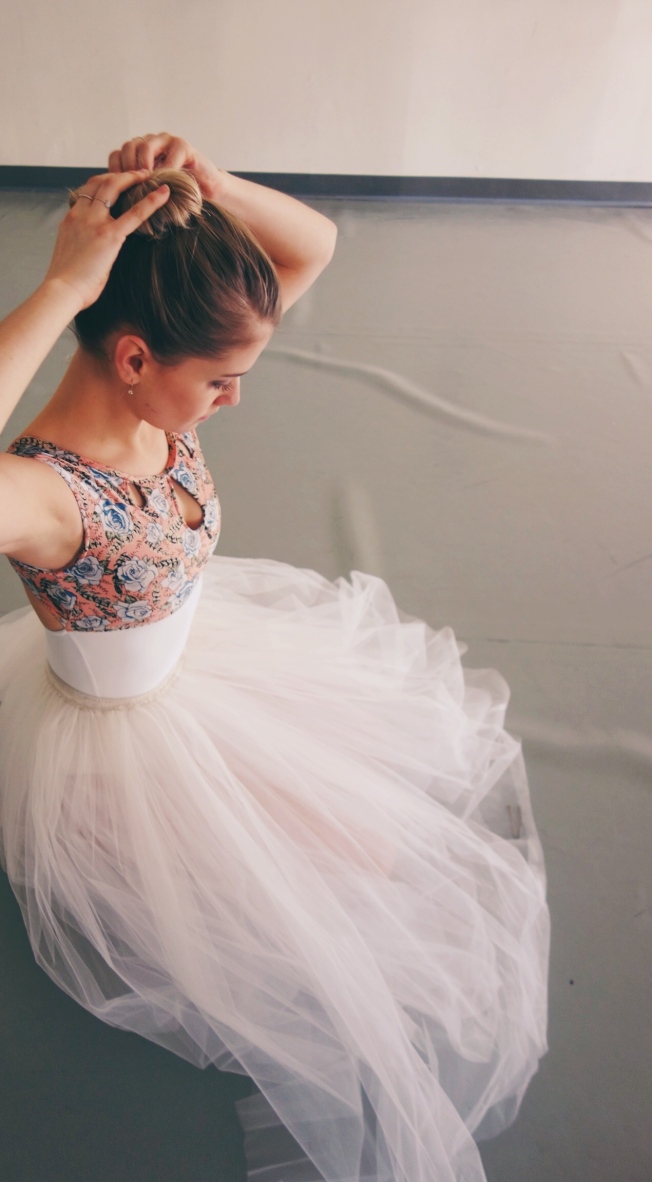 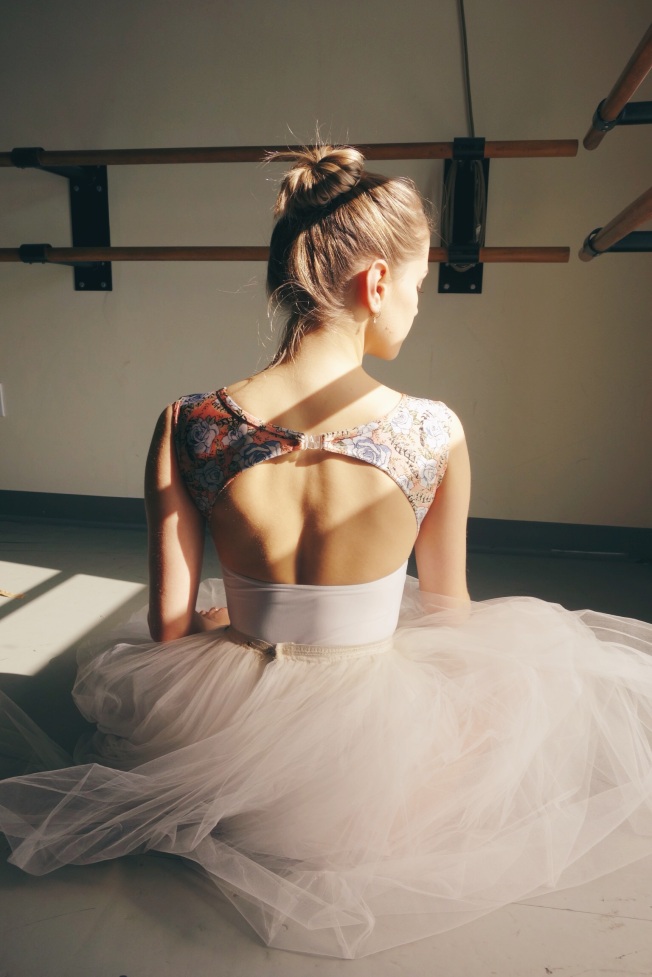 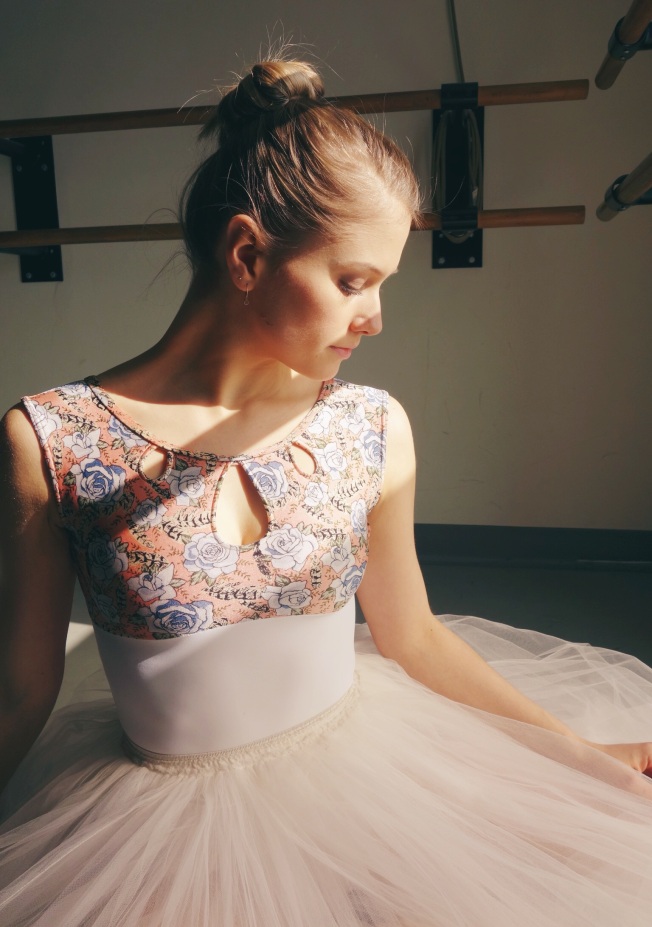 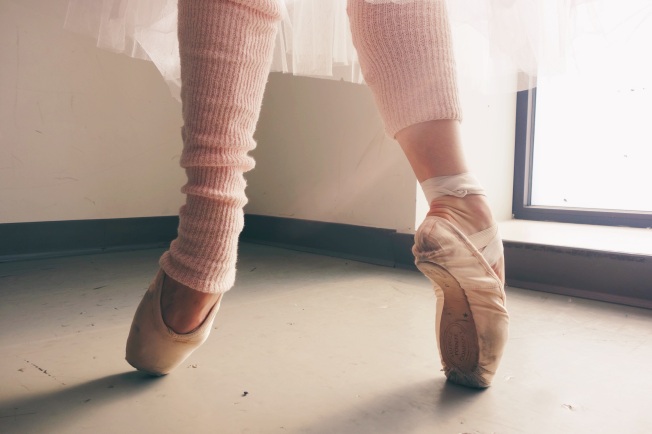 “The very substance of the ambitious is merely the shadow of a dream.” -William Shakespeare

Between bruised knees and sore ankles, the pink satin dream of a young girl in pigtails tends to slip away, masked by the shadows of a calloused reality.  But sitting in the small pool of sunshine by the window in studio 2 yesterday, draped in the tulle fairytale my younger self once subconsciously designed, I couldn’t help but bask in the dreaminess of it all.  Of course I promptly tweaked my hip upon standing, and felt compelled to reflect on the relationship between light and shadows; Polar opposites upon first inspection, in reality one could not exist without the other. 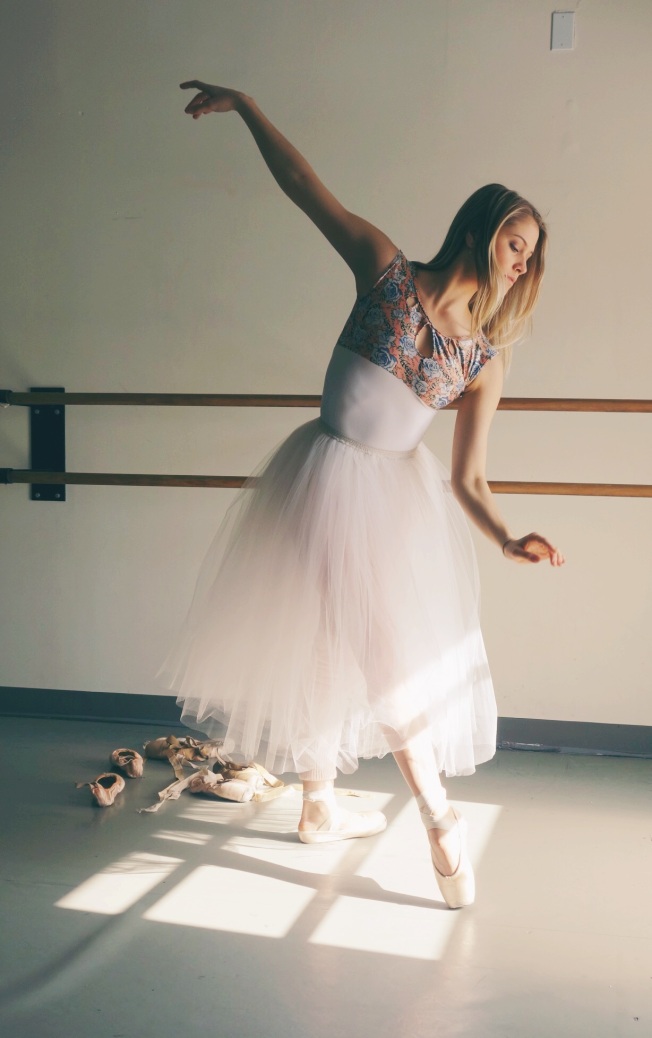 Interdependent and eternally connected, light and darkness tempt and rescind each other, distort and define each other.  The very existence of one both creates and negates the other, making it impossible for them to separate or marry, and the incoherent dance endures, a perpetual representation of the incidental union of two contradicting entities.   Ballet often manifests itself in this paradoxical friction, simultaneously embodying beauty and disfigurement, intense pain and a lack of fear.  On stage we exhaust ourselves to present the audience with artificial ease; We submit to hours of physical malady in the production of an unmatched elegance.  But if we listen to Shakespeare, we come to understand that most dreams take the form of a shadow while being pursued by those who truly aspire.  That is, it is in this work and toil that dreams eventually come to fruition.  One relies on the other, no matter how antithetical they may seem. 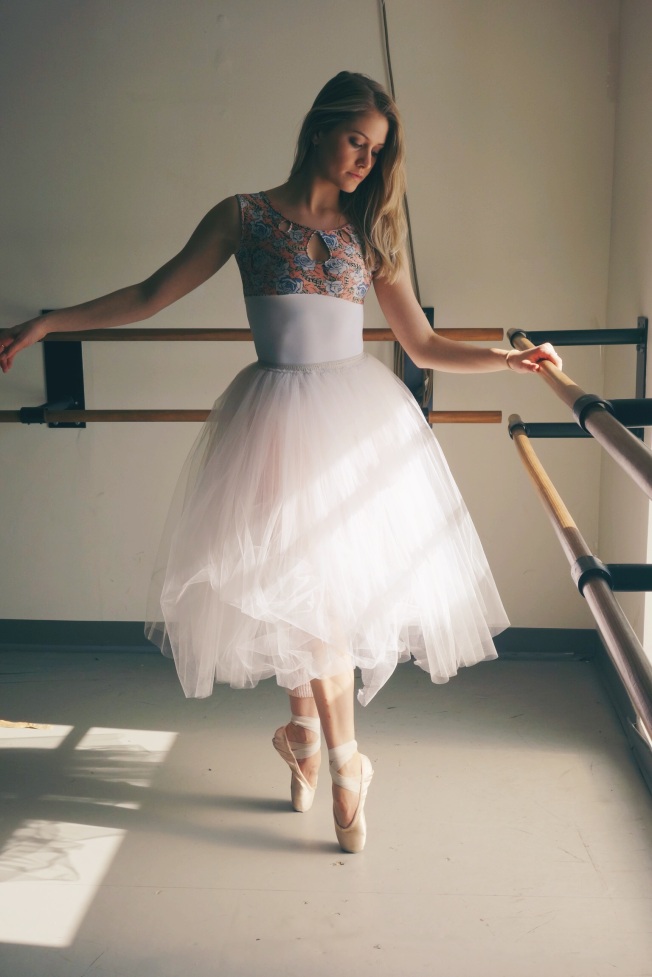 In these moments, where the dream and reality intersect, I wonder if a bit of borrowed spirit from a younger, poufy-tutu-clad me isn’t the missing link between my light and my shadows.

PS- Do you like my special new leotard?  Stay tuned for a very exciting announcement, coming soon! 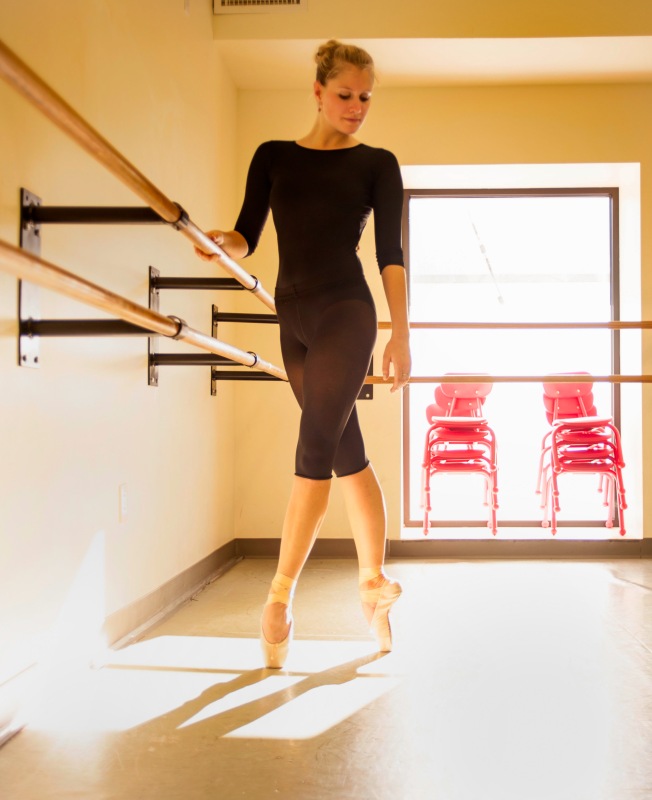 Seeking perfection for a living can be mentally draining, to say the least.  With so many negative thoughts swirling around in your (bun)head day in and day out…my feet never point in that lift! my butt looks huge in this costume! why can’t I just turn out?!…it’s not hard to lose sight of what’s really important: connecting with your audience.

Enter Sheila.  This Tuesday, a “Backstage At The Arts” class for art-lovers of a more advanced age sat in on our rehearsal day.  About twenty charming students perched in the rows of our black box theater and observed as we marked, ran, and worked through the difficult bits of each piece for this weekend’s show.  Before my scheduled rehearsal time, our artistic director, Misha, opened the floor to any questions the students had for the dancers.  After informing the room of how I’d been dancing since I was 2 years old and my dream company (de jour) is Boston Ballet, Misha let them all in on a little “secret” of mine.  You guessed it, my injury.  The words fractured spine escaped from my subconscious, rolled out through Misha’s pursed lips, made their way to the ears of the students and rushed down their unsuspecting throats, pausing once for an audible, collective sharp inhale before passing down into their stomaches, where they seemed to sit quite uncomfortably.  This spawned a series of How did that happen?  Were you dancing?  How long did it take to recover?  How long have you been back in the studio?  and before I knew it I was in the middle of the first run of In Passing.  We worked on some corrections, ran the piece again and rehearsal was over.

Still feeling a bit too rusty to be in front of an audience, I didn’t waste time exiting the studio after practicing a few pirouettes.  As I b-lined for the dressing room, a woman stopped me.  It was Sheila.  She tapped me on the back and proceeded to express just how deeply In Passing had affected her.  She told me how much she enjoyed my dancing and that the piece nearly moved her to tears.  I noticed she was holding a camera in the same moment when she asked if I might be willing to pose for some photos in an empty studio down the hall.  Of course, being so grateful for her kind words, I obliged.

The shot above, which Sheila has dubbed “Ballerina with Red Chairs”, was the result of this mini photoshoot.  Whenever I see this picture, I will remember Sheila and her warmth.  Every time I look at my shadow cutting through the block of sunlight shining in through the window, I will be reminded of how just a little bit of darkness can interfere with something that is meant to be bright.  So here’s to a night of accepting our shadows and spotlighting our bright bits.  We could all use a little positivity sometimes…don’t you think?