To quote a friend’s recent Facebook status, “Ballet is sooooo IN right now”.

Last night, the CW’s newest reality series “Breaking Pointe” (which chronicles the unconventional lives of the dancers of Utah’s Ballet West) premiered, and I have to admit I kind of loved it.  I did not have very high hopes for the show- lumping the distinguished art of ballet in with the likes of Snooki and Teen Mom?  yuck!- but was pleasantly surprised by the overall realness and lack of dramatization.

“Breaking Pointe” is especially interesting for me, because while competing in the Youth America Grand Prix ballet competition finals during my junior year of high school, I was offered a traineeship with the very company being featured on the show!  I also worked closely with Ballet West’s artistic director, Adam Sklute, at the intimate Jacob’s Pillow summer intensive in 2010…the ballet world is so very small!

Speeeeeaking of Youth America Grand Prix, has anyone heard about the newly released documentary following 6 young dancers as they compete in the world’s largest international ballet competition?  Well needless to say, as a former competitor, I was extremely excited to see the film.  And when I did, the funniest thing happened: on the screen was footage of the featured dancers preparing to take the stage in the final round, but coming through the speakers and filling my ears was the sound of my own voice!  Back in 2009 when the documentary was being filmed (and I was in NYC competing alongside all of the amazing dancers seen in the movie), a cameraman pulled my friend and I aside for a quick interview- a 5 minute questionare I assumed would never resurface.  But to my shock, there was the voice of my 16-year-old self, loud and clear, speaking about typical ballet misconceptions:

“People think that football players and lacrosse players are the ones with the injuries.  In ballet, we are getting injuried every day.”

Amen.  Words of wisdom spoken well, if I may say so myself (proud accomplishment for me, what with my serious fear of both live and on-camera public speaking).  If you haven’t seen the documentary yet, go check it out!  And listen for my special (vocal) appearance!

…and just for fun here’s a photo of my friend, Kristi, and I just before doing the interview: 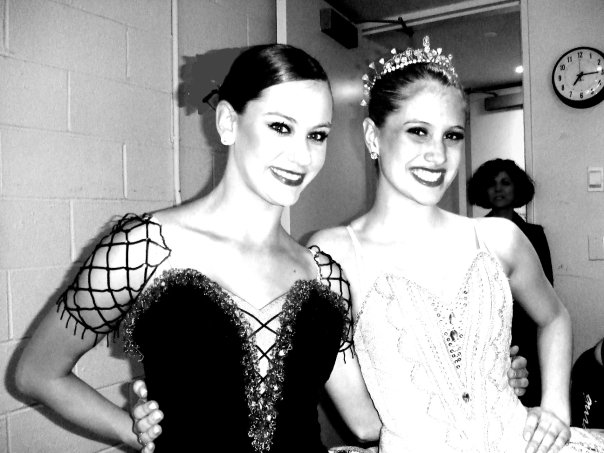 2 thoughts on “when ballet became trendy”